Early this term Flynn competed at the National Diving Championships. Here is his account of his trip.

Diving, a sport that not many people do or have even seen but recently I was lucky enough to go compete at the diving skills and age group nationals in Hamilton and this is a bit about it.

So first we had to fly up and get a bus to our hotel just next to the pool and only spent a bit of time at the hotel then the whole club (15 of us divers total) went to the pool for training before competing for the next day. Unfortunately, my ears were blocked from the plane flight and hurt too much under the pressure of the water so I couldn’t train for tomorrow which wasn’t great because my event was the first event. But the next morning I was so ready for my event, but also a bit nervous because I felt like I had high expectations for myself since I also went last year to the same competition. But my first event went pretty well I got 2nd in my 3-metre board and it was so exhilarating having a big crowd watching you but I did very well and got a silver award and we didn’t do anything else for the rest of the day except cheer on other divers and that was pretty much the end of day one. The next morning I was feeling really confident because I had the event I thought I would be best at which is my 5-metre event and also again I did exceptionally overall but on some of my dives, I got really good scores like 8.5, 9 and 9.5 and ended up getting 1st and a gold award which just made my day. On our final day of competition, I had my 1 metre which I was pretty good at and also ended up getting some really good dives and scores and got 1st again and another gold award. Also on that day, we had medal presentations where they added up all your scores you got and divided it by three so I ended up getting a silver medal and was really happy with the whole time I spent up there, and I´m really excited for the next nationals in Dunedin next year. 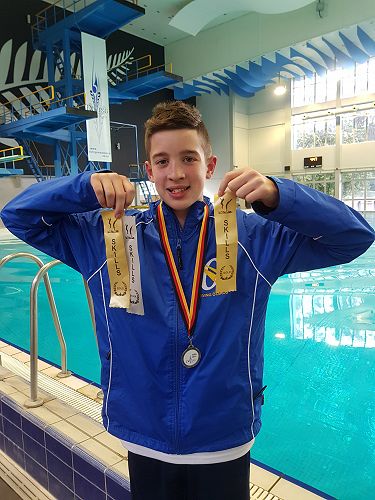