On the 11th of May the first games of hockey for the season were held at the McMillan turf throughout the evening. Based on their skills, teamwork and the outcomes of the games, it is clear that Balmacewen Intermediate has four amazingly talented hockey teams! Luca interviewed some of the players from each team after their games.

The Balmac Green team played against Tahuna C’s and won 3-0. Mrs Quelch commented that the team “played a great game with good energy for a team who haven’t played together before!” Maia P joked that “it’s not as easy as it looks to run in goalie gear!”

The Balmac Blue team also had a great success in their first game of the season smashing Taieri College Gold 13-1, co-captain Zac C said “we’re pretty good but have lots to work on.”

The Balmac red team also won against the Columba Doves. Here is what Molly from the Red team had to say:

“We need to work on staying in our positions more but apart from that I think we played really well!”

To add to the winning streak Balmac Yellow came away with a win against Kavanagh College 2-1. Tessa H rated their game a 7 or 8 out of ten and said, “we need to work on using our inners and wings.”

I bet that all of the teachers and staff that were involved with hockey, are very proud of how Balmacewen Intermediate played and represented our school on Friday! If you play hockey we hope that you had fun at your first game and if you don’t, we hope that you enjoyed reading our article! 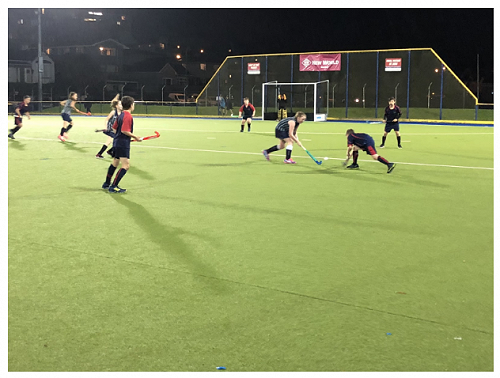