Balmacewen Boys Football Team has continued their unbeaten streak with two further wins to their tally.

As the winter weather continues to throw all it has at us, so does the Balmac Boys Football Team towards their opponents.         After a frustrating end to Term 2 with cancellation after cancellation the boys have been able to get out on the paddock two weeks in a row. They have shown steady improvement as they continue to build as a team unit and are starting to exhibit some fantastic football in the process.

The first game of the term was against Taieri College. Although played in Mosgiel, the team looked right at home from the first whistle with Tyson grabbing his chance up front with both hands and making a run from the kick off, right into the back of the net. Tyson Room 14 would go on to put a further six goals past the busy Taieri keeper in a well played afternoon's work.

The team did very well to keep their structure during the game and were able to practise many of the tactics they had been running through on the training pitch. Their wing play was very fluid and they were able to switch the ball from one side to the other with great effect.

In the end Balmac was far too dominant for the brave Taieri squad who kept playing right to the final whistle. Although the Balmacewen boys took their foot off the throttle early on, some 19 goals still made their way to the back of the net by the final whistle.

Notable strikes coming from the very promising young defensive duo of Luke and Fletcher. Both hitting shots from well outside the penalty box to score. Tyler of Room 10 also put his hand up for further game time with a well taken hat trick.

As usual the team was lead well by their inspirational captain (George Bates) and the midfield made sure the team held its shape, directed with brilliant ball distribution from Oliver Room 7.

The next game was of more importance to the team as they took on the Year 7/8 squad from John McGlashan in the annual inter-school. McGlashan had fancied their chances in this encounter. A rare opportunity to take a win from the boys of Balmacewen. It was not to be for the McGlashan team as they came up against a very well organised Balmac team who took control from the start of the game and never relinquished it.

Balmacewen were able to use the width of the pitch very effectively and continually probed the defence of McGlashan until after some ten minutes the ball found its way to the back of the net from a well finished strike courtesy of Taine Room 24.

The team moved the ball around the park with ease and held possession by playing the ball back through defense until options presented themselves. A skill yet to be mastered by teams many years their senior.

The defence of Balmacewen did a fantastic job of snuffing out any possible opportunity that McGlashan started to build and were able to turn it into counter attacking ball through the superb play of the outside backs Fletcher and George (Captain).

There were many stand out players in this dominant team performance. A welcome return from camp for the Room 24 boys made a big impact on the fluidity of play and chances were taken with accuracy by all three boys: Taine, Harvey and Beckham.             Goal of the game came from Harvey with a brilliant volley, pulling the ball back in from the front post off a corner kick to push it across the face of the helpless goalie into the side netting of the far post.

Most promising of all was the input of the Year 7 players. A great sign for next season as they all are starting to show confidence in their positions and great improvement from game to game.

The final score settled at 9-0 to Balmacewen. A great result considering McGlashan showed the most promise of any team played so far this year. With the Southland Boys inter-school fast approaching the boys will all be keen to continue the exciting brand of football they have been playing of late. Conversely,  Southland should be rather worried about the encounter. 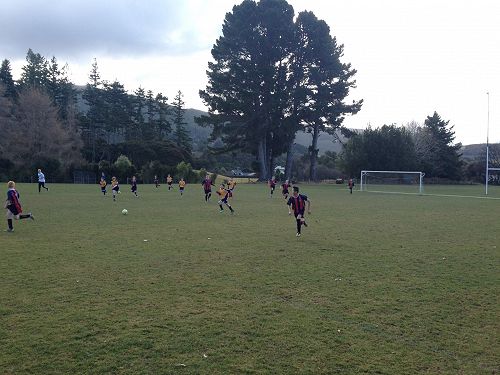 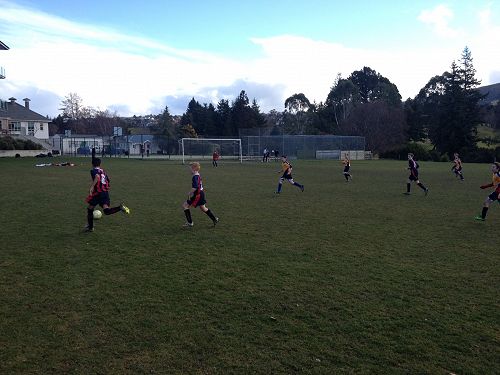