Campbell Landrebe entered the Gold Guitar competition in Gore for the first time ever. Read on to see how he went...

Hi my name is Campbell, as you may know I went down to the gold guitars in Gore and I competed in 3 events. The 1st was solo which is kind of a storytelling genre the 2nd was gospel which is songs about the heavens and religion and the 3rd was country rock. I got into the finals for country rock and solo. I sung country rock first and I think I did well. Next my sister and I sung a duet. We were amazed at the sea of black as we looked out to the audience, there was over 1500 people in the crowd and all you could see was the front two rows.

Next was solo and that was just the best feeling ever I sung Oklahoma by Billy Gillman. It the best I had ever sung it and after that all the finalists went into this cold little room and waited for everyone else to sing.

Then there was prize giving I remember I was so nervous I really wanted to win the solo it was the best I had ever sung and I only wanted that. They were calling everyone up and then they said "right, now I shall present the solo award and the winner goes to..... Campbell Landrebe from Dunedin give him a big hand everybody!" I was so so so happy it was so good.

After having won the solo award I suddenly realised I was in the running for overall winner and I'm talking out of the whole of NZ. But how could I win it was my 1st year of actually doing gold guitars? I thought. Then the announcer said "alright folks this is the moment that we have all been waiting for the winner will receive $1000 travel money a strawberry sound microphone $400 prize money and the overall junior guard of gutiars trophy. The winner is........................ Campbell Landrebe!!" It was like BOOM!!! I was so so so so so so so happy I won this, words couldn't describe how I felt it was just amazing!! 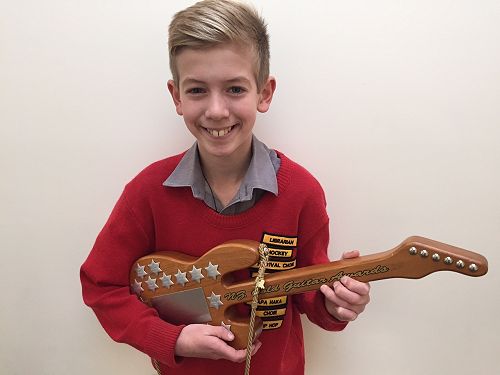